Wall Street Journal - Cheaper By the Dozen | By: Telis Demos

Investing in single-family homes is becoming increasingly popular—and now Wall Street has dreamed up a new way for investors to become landlords without worrying about 3 a.m. plumbing calls or late rent payments.

Over the past year or two, firms that invest in real estate have been snapping up foreclosed homes for a fraction of what they fetched before 2008. Now the firms own tens of thousands of single-family homes, and some have begun to sell them in tiny slices to hedge funds, pension funds and individual investors in the form of real-estate investment trusts. 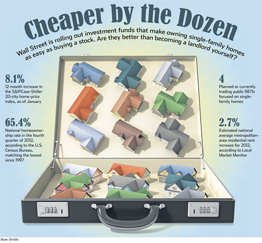 Some of these investment vehicles began as privately held REITs but are now going public, opening their doors to investors of all stripes and joining the REITs that own apartment complexes and commercial properties that have been around for decades. Right now, two single-family REITs have gone public, and at least two more have announced they plan to do so.

“There will likely be a number of IPOs looking at this generational opportunity to shift home rental from individual landlords to institutional players,” says Stephanie Ruiz, a managing director at Credit Suisse Group, CS +0.48% which was an underwriter on the initial public offering of Silver Bay Realty Trust, SBY +2.04% one of the first single-family REITs to list.

The idea sounds promising, given the boom in rentals since the financial crisis. But the business model still is in the early innings, and it isn’t clear how efficient it is. Much will depend, analysts say, on the expertise of individual managers in such nuts-and-bolts items as leases and building maintenance.

Investors are nibbling, in part because they are hungry for returns at a time when interest rates are hovering near zero and in part because there are strong signs of a housing-market recovery. REITs, which don’t pay income taxes if they pay out at least 90% of their earnings to investors in the form of dividends, offer relatively high yields.

Warren Buffett, chairman of Berkshire Hathaway, BRKB +0.28% told CNBC last year that if it were possible, he would buy “a couple hundred thousand” single-family homes and hold them for a long period.

Property-owning REITs on average carried dividend yields of 3.3% as of the end of March, according to the National Association of Real Estate Investment Trusts, an industry group. Some experts say that single-family-home REITs could eventually yield more than 5%.

Yet there is no guarantee the new REITs will be able to deliver consistently high returns or income. While residential rental rates have broadly been rising since the financial crisis, in some market segments the gains are slowing or reversing. For example, the median rent on three-bedroom homes in the Atlanta and Dallas markets declined by more than 1% in March versus a year ago, according to RentRange, a housing data provider.

“Historically, it’s been an individual managing a couple properties locally, and now we have institutions trying to do it at scale,” says Rick Sharga, executive vice president of Carrington Mortgage Holdings, a home investment and management firm in Aliso Viejo, Calif. “But there’s not a lot of history to go on, so it’s difficult to make a bet not knowing exactly what the behavior is going to be in this new asset class.”

The key for investors looking at these REITs is finding the ones that get the details right, says Credit Suisse’s Ms. Ruiz. “It will be about knowing when to make two-year leases, how to buy homes in good school districts, and how much money to sink into kitchens,” she says.

Does it makes as much sense to own a sliver of 10,000 homes as it does to own just one?

Owning and renting out a home can, in theory, exceed the returns on many different types of yield-focused investments. The average metropolitan-area residential property nationally should generate a risk-adjusted annual yield—known as the capitalization rate, or “cap rate”—of 5.4%, according to housing research firm Local Market Monitor.

The potential headaches of being a landlord include prolonged vacancies, unexpected maintenance and repair costs, deadbeat tenants and difficulty refinancing. And if you own only one or two properties, your exposure to a catastrophic event—fire or flooding, for example—grows exponentially larger.

In addition, repair costs are greater for single-family-home rentals than they are for comparable apartments in a single complex.

George Siddons is a big believer that owning a single home can be a worthwhile investment. His firm, the Glendale, Ariz.-based Key Management, handles maintenance, rental and other management tasks for about 680 properties. Most of his clients own just one investment home.

But he says that approach comes with plenty of headaches and hidden costs, such as the fact that you can end up owing taxes on improvements when you sell a home.

Mr. Siddons says experience has taught him that managing dozens of homes spread out across a single city, much less the country, doesn’t lend itself to scale, such as buying paint and other supplies in bulk.

“If you had apartment complexes, that would be best to do it that way. But for single-family houses it doesn’t work,” he says. There are just too many differences in the ages of homes, their individual fixtures and problems, to scale, he says.

The REITs propose to deal with those headaches by spreading them out over thousands of properties.

Unlike someone who owns one home, or even hundreds, they have opportunities to reduce costs through big investments in technology, and by scouring the country to find properties that all fill the same basic profile, in terms of tenant turnover and the state of repair of the homes.

“You have to look at your level of pain,” Mr. Siddons says. “Can you stand being a landlord? If you can stand to buy a couple of properties and hire a management company, that’s the way to go. If you don’t want to be that much involved, then the REITs are the smarter way to go.”

Despite their unique structure, in practice, REITs are highly correlated to stocks, says Ron Rogé of wealth-management firm R.W. Rogé & Co., which manages $205 million in Bohemia, N.Y. Mr. Rogé says that he would expect the new publicly traded single-family-home REITs to act much the same way, adding that many investors might find they already have a significant REIT allocation through stock-index mutual funds and exchange-traded funds.

For example, the top holdings of the iShares Russell 2000 index ETF of small-cap stocks include Starwood Property Trust STWD +1.80% and Highwoods Properties, HIW +0.60% which owns commercial properties mostly in the South. Starwood, which typically invests in loans to large commercial properties, has recently invested about $200 million in single-family homes, the company said.

Rick Ferri, founder of investment advisory firm Portfolio Solutions in Troy, Mich., which has about $1.3 billion under management, says investors might consider including single-family REITs as part of their overall REIT allocation. Since the REITs own thousands of homes, they offer instant diversification, he says.

“These things are like index funds of single-family homes,” he says. “There’s a very small risk on a per-home basis.”

Mr. Ferri says that the new REITs might work especially well for retirement accounts that can avoid taxes on the REITs’ distributions. Investors should check that the REIT managers have experience handling single-family real estate, he says.

Right now, though, there are only a few options for retail investors looking to buy into the new single-family REITs. Two came to the public market in December: Silver Bay Realty Trust and Altisource Residential, RESI +0.50% which was spun off by a former subsidiary of Ocwen Financial, OCN +1.96% a mortgage servicer.

American Residential Properties, a nontraded REIT based in Scottsdale, Ariz., filed for an IPO in March and could go public later this month. Another private REIT, Malibu, Calif.-based American Homes 4 Rent, also has announced it plans to go public this year.

Nontraded REITs are available only to institutions and so-called accredited investors, or those worth at least $1 million, excluding the value of their primary home, or who have had an annual income of at least $200,000 for the past two years.

Once the single-family REITs raise more capital and accumulate more properties, bankers and analysts expect they will produce typical dividend yields in excess of REITs that invest in multifamily properties, which carried an average yield of 3.3% in March.

Omotayo Okusanya, an analyst at Jefferies Group, says fully invested single-family-home REITs could produce annual dividend yields of around 5% over the next five years.

The Risk of REITs

There are two big questions for investors: Will the REITs produce the income they expect, and will they be a good vehicle for profiting from rising home prices?

Some veteran real-estate investors are unsure about the income potential of the REITs, because the economics of owning and renting out thousands of homes aren’t yet proved on such a large scale.

Joel Beam, manager of the Forward Select Income Fund, says he passed on Silver Bay’s IPO, though he has invested in some private REITs. “With the existing REITs, you have more of a known pool and you have more well-established economies of scale [and] financing,” he says.

Other investors will focus on whether REITs are able to buy homes at attractive prices. The REITs say they have ways of finding such properties, despite rising competition from one another, through auctions and sales of portfolios of foreclosed homes that banks are stuck with, for example. They also say they can more readily identify the good investments from the bad ones based on their vast data sets.

The REITs and other funds buying homes are “still pretty small compared to the housing market overall, which is millions of home sales annually,” says David Miller, Silver Bay’s chief executive. “The ability for institutions to move the market dramatically is not a big concern.”

Some big investors in REITs might focus on finding the ones that purchase homes at the cheapest prices and are thus in the best position to gain from home price appreciation, says Jefferies’s Mr. Okusanya. These REITs may trade at a premium, he says.

But it isn’t a simple matter for small investors to gauge “cheapness.” That often requires using pricing databases to determine typical sale prices of nearby homes and having a sense of the “replacement cost” of constructing a new home in the same spot, a common valuation measure.

People who currently own investment properties, or are thinking of buying them, also might welcome the entry of single-family REITs, as they could bring additional liquidity to the housing market.

Jeffrey Sica, a Morristown, N.J.-based wealth-management adviser to high-net-worth individuals and family offices, argues that direct investing—either by yourself or as part of a small group—offers a greater ability to control the cost of acquisition and the timing of any sales. He says it also is possible to ride the wave of REIT growth by selling an investment property to a big fund.

“I represent local clients who have been buying single-family homes since the crash at what I would consider great prices,” Mr. Sica says. “I bet they can’t wait for the suits to fly in and make an offer they can’t refuse.”