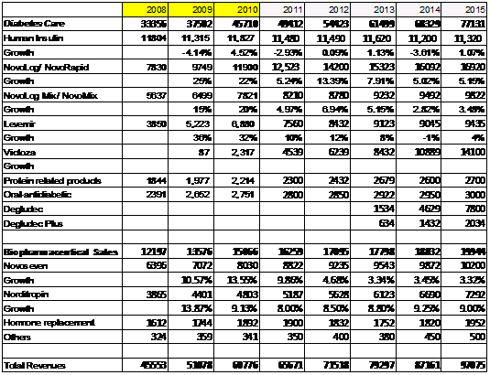 Assumptions:
1.Human insulin growth likely to be flat to declining due to rapid improvements in modern insulin.
2.Novolog/Novorapid, Most rapid acting insulin used by both Type 1 and Type 2 diabetes. Expect high growth in Asia(10k).
3.Novomix/Novolog Mix, Most preferred biphasic insulin at later stage of Type 2 but Degludec plus presents a threat to this in long term.
4.Levemir, Growing fast in U.S. and achieved Blockbuster status in 2010 but faces threat from Degludec.
5.Victoza approved in U.S. in 2010, GLP-1 status offers benefits, expecting roll out in Asia soon.
6.Protein related products, Expected to remain flat but not declining in coming years along with Oral antidiabetic products.
7.Degludec, a strong substitute to Lantus and with very positive results.
8.Degludec plus, has superior results over NovoMix and a strong substitute.
A DCF analysis was performed based on above revenue estimates and projected financial statements,
The DCF valuation estimates the stock price of DKK 775.34.
Click to enlarge 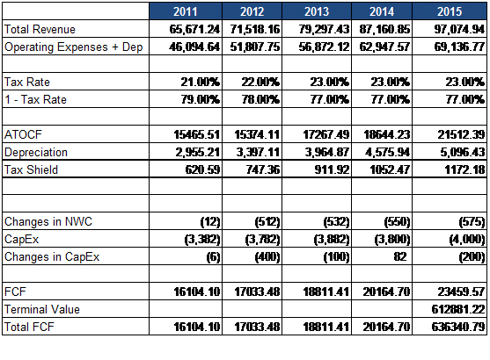 Disclosure: I have no positions in any stocks mentioned, but may initiate a long position in NVO over the next 72 hours.

Additional disclosure: This discussion is for informational purposes and should not be taken as a recommendation to purchase any individual securities. Information within this discussion and investment determination of the author may change due to changes in investment strategy when warranted by changing market conditions, or if a security’s underlying fundamentals or valuation measures change. There is no guarantee that, should market conditions repeat, this security will perform in the same way in the future. There is no guarantee that the opinions expressed herein will be valid beyond the date of this presentation. There can be no assurance that the author will continue to hold this position in companies described herein, and may change any of his position at any time. We use or best efforts to obtain good data in our models, however it can’t be guaranteed that our inputs and data are correct. This is not a recommendation for readers to purchase shares in the above security without consulting your financial professional to discuss your own risk tolerance and objectives.