Apple (AAPL) is a company whose stock receives around-the-clock press and analyst coverage. One would expect a stock that is scrutinized and adored this much to be appropriately priced and have all known elements (news, future expectations, worries) factored in. Then why is Apple trading at 70% of our calculated intrinsic value?

The Apple outlook is positive for many reasons. They are dominating the tablet market, with $2.8 billion in iPad sales for Q2 and overwhelming/unpredicted demand for the second installment. However, the real cash cow of the company has been, and will continue, to be the iPhone, which is at 25% of total smartphone market share and climbing. With the iPhone, Apple is seeing large profits off of higher margin sales such as application and iTunes purchases. The operating system of the iPhone (the iOS) is clearly superior to the Android and RIM (RIMM) phones. Its dominance has the potential for the following analogy to come true; Windows is to desktop dominance as iOS is to smartphone dominance. 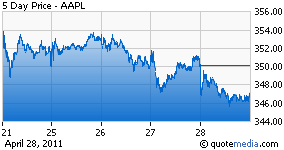